OK, we’ve all had cramp – I’ve had the worst kind of cramp, when you wake up and you are convinced you have somehow managed to kill your own arm in the night.

You’ve slept on it and its DEAD. You begin to panic, whats been 5 seconds seems like an hour, you pick up your dead arm and start waving it around the room shouting “my arm, I’ve killed my arm” this of course wakes Jody up! then the pins and needles set in….

Apparently when you get cramp when your pregnant its a lot worse (hmmm I’m not sure) well anyway I was woken up the other night by my beautiful wife because she had cramp in her calf, so I googled this … 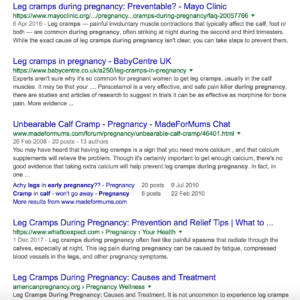 “Yes its very common, now go back to sleep” wasn’t the answer she wanted to hear, for the next 25 mins I was her massage therapist and massaging her calf muscle in her leg.

View all posts by Guy

2 thoughts on “The “Pregnancy” Cramp”

Krazy Kidz Disco
5.0
Based on 6 reviews
powered by Facebook

Debbie Honeywell
2019-03-03T17:15:09+0000
Had guy of krazykidz disco. My daughter and friend booked him for 2 hours today for a joint 5 year old birthday party.... There was ages from 1 year upwards. What can I say but. FANTSTIC. he got every child and every parent involved. He was very very funny, we normally have soft play and bikes etc but it was the best birthday ever. I would even have him at an adults party for the entertainment so so funny and I didn’t stop laughing. Thanks again Leo nanny Debbie. Xxx🤪read more

Paris Maria Cuin
2019-03-03T15:20:20+0000
I just want to say you will not get ANYONE better than this guy! He made my sons birthday party the best, and everyone... after was saying it’s the best party they’ve EVER been to! One amazing entertainer - can’t recommend enough so Thankyou!read more

Carly Oldall
2019-02-25T19:49:14+0000
Five stars!! Guy is absolutely hilarious had everyone in stitches from start to finish, kids and adults equally loved... you!! Thank you for being incredibly funny, incredibly professional and an all round star. It was such a relief to leave the entertainment of a bunch of four year olds in your very capable hands. Total stress relief. Can’t recommend highly enough!! X⭐️⭐️⭐️⭐️⭐️read more

Claire Emery
2019-02-21T08:56:53+0000
Just like to say a big thank you for entertaining the children and the big kids at Elaine birthday party Very funny... and got everyone involved even the shy children Would definitely highly recommend and use again 10/10 Thank you againread more